Story on Aurelia with Helsingin Sanomat

Hydrogen is a fuel for tomorrow, and Aurelia’s turbines can run on hydrogen. This article has been published in an advertorial delivered with Helsingin Sanomat, Finland’s leading daily newspaper. It can also be viewed online at https://newspool.fi/vedysta-saadulla-energialla-tasapainotetaan-tuulivoimaa/ 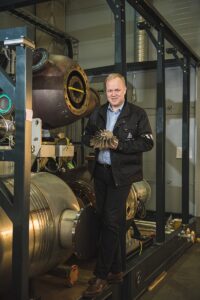 Companies are starting to use hydrogen as a pollution-free fuel for the production of electricity and heat. Hydrogen is needed to balance fluctuations in wind and solar energy.

People are busy at the Lappeenranta plant. Aurelia Turbines sent the first turbines out into the world last summer, and now series production is about to begin. In addition to having high efficiency, Aurelia’s turbines differ from other turbines in that they can also use hydrogen as fuel.

For the successful use of hydrogen, co-operation has been established with DLR, the German Aerospace Center.

‘Hydrogen gases burn too hot for use in conventional turbines, melting parts. We solved the problem by developing new technology with DLR’, says Matti Malkamäki, CEO of Aurelia Turbines.

Hydrogen is the most common element in the world. It makes the sun shine.

When hydrogen is used as a fuel, the output is water vapour in addition to energy.

Hydrogen has long been discussed as a fuel, but the world began to move from words to action over the last year. Energy production experienced a radical change.

‘Last year, the International Energy Agency (IEA) announced that, in most parts of the world, solar and wind power have become the most cost-efficient energy source. New coal-fired power plants should not be launched because of their cost. In the next few years, many old coal-fired power plants will be shut down for economic reasons.’

The price of wind and solar electricity has fallen, thanks to innovation and higher production. Development continues.

However, there is not always sunshine or wind. To obtain energy in this case, balancing power is required.

‘Hydrogen is a suitable fuel for balancing power: hydrogen can be produced from water with wind power and stored for later use. Hydrogen gas is then burned for energy when it is dark and calm.’ 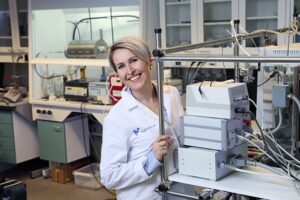